The Dutch company LUCO TOYS presents a new generation of its toy bricks: interlocking building blocks made from JELUPLAST® bioplastic. The wood composite creates eco-friendly toy bricks that are dimensionally stable and resistant to breakage. 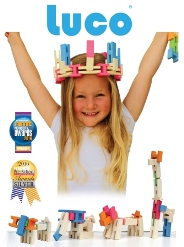 The industrial designers Roger van der Linden and Chantal Voskuilen have developed the environmentally friendly toy blocks LUCO BRICKS. Before starting their own business, they worked for LEGO, PHILIPS and other companies. It was their son who led them to come up with the idea of interlocking wooden bricks. He loved to create imaginative buildings and creatures from wooden blocks. Since wooden blocks do not interlock, he often shed tears when it was time to tidy the room because it was not possible to move the structures aside without destroying them. The parents sought a solution and carved interlocking toy bricks out of wood so that the structures would remain intact when tidying his room. Their son loved the bricks! That was the most important endurance test for the inventors. Hence, the idea of LUCO BRICKS was born. The industrial designers developed a total of four toy brick shapes. Then they founded their enterprise LUCO TOYS to produce and market the building blocks on their own.

Successful entry to the market was followed by the next step. The designers developed a new generation of toy bricks using JELUPLAST® bioplastic. The first generation of wooden bricks is made from rubber wood. Wood, like any other natural material, comes with a certain variance. Therefore, Roger van der Linden and Chantal Voskuilen decided to create a second product range from bioplastic; this is a material that is also eco-friendly, but can be formed more precisely. In the search for a suitable material, the designers paid particular attention to eco-friendliness. In addition, the bioplastic should be easy to process and feature reliable properties. They found what they were looking for in the materials by JELU. In JELUPLAST®, the German company offers a wood plastic composite that combines the advantages of both materials. The plastic content enables the material to be moulded three-dimensionally and adds elasticity to the toy, while the wood lends it rigidity and strength, increasing its resistance to breakage. With their clearly defined properties, the wood fibres allow for reliable adjustment of the material specifications. What Roger van der Linden and Chantal Voskuilen appreciate most in JELUPLAST® is that it has a look and feel like wood. 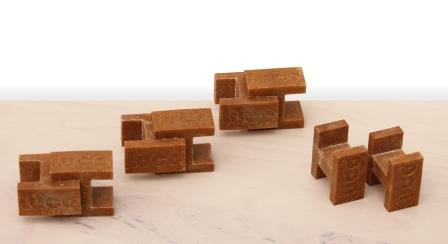 Developing the new toy bricks took about a year. The founders had their Chinese partners conduct the test series. JELUPLAST® is processed using conventional machines in injection moulding. It quickly became clear that the tolerances of injection-moulded building bricks are smaller and that the bricks will fit together better when interlocked. Moreover, the toy bricks can be manufactured faster and cheaper. In order to achieve an optimal result, the industrial designers are now having their injection moulding tool adapted to JELUPLAST® for serial production in the Netherlands. In future, LUCO TOYS will offer its toy bricks in two versions: all four basic shapes will then be available in wood and bioplastic. LUCO BRICKS are sold in Europe, the USA and Asia. In addition to families, the Dutch company’s customers include schools and daycare centres for children.

The wooden and bioplastic toy bricks can be easily mixed and interlocked into each other – there are no limits to children’s imagination.
Picture: © LUCO TOYS – www.lucotoys.com

JELUPLAST® is supplied in WPC granulate form. Depending on the plastic added, the composite consists up to 100% of renewable resources. The wood fibre content can range from 50 to 70%. JELU only uses fibres from selected types of wood that meet certain criteria, such as having a fixed grain size and being of the same type of wood. The physical-mechanical properties of the material can thus be reliably adjusted to specific values. Only woods from sustainably managed forests (PEFC) are used.

The plastic used is optionally:

JELUPLAST® is food-safe and does not pose any risk to health. The material complies with all the parts of the European Toy Safety standard relating to health. The ISO 22196 antimicrobial efficacy test has demonstrated that JELUPLAST® has a strong antibacterial effect.
JELUPLAST® is suitable for conventional plastics processing machinery and can be used for injection moulding and extrusion as well as compression moulding to produce high-quality toys. The bioplastic can be dyed in a variety of colours.
JELU offers premixed compounds that possess different properties depending on the type and amount of the ingredients. Custom compounds with individually adjustable properties are also possible.

The Dutch company LUCO TOYS was founded in 2015 by the industrial designers Roger van der Linden and Chantal Voskuilen. With their eco-friendly interlocking toy bricks, they want to strengthen children’s imagination and stimulate their motor skills and 3D thinking.

This article was published in Issue 02/2018 of bioplastics Magazine.

This entry was posted in Bioplastic, Press Releases, Wood Plastic Composites on Wednesday, 30. May 2018.

WPC made by JELU is suitable for all areas of life. and many more. Here you will find more information on WPC granulate from JELU.